What do we mean by forgiveness and how can we deal with legacies that come from those who have hurt us and who we have hurt?

Those themes are explored in Testament, an online trans-Atlantic collaboration between American company Via Brooklyn, and British writer, Tristan Bernays.

The show first surfaced at the Vault Festival in 2017, but this piece, which transposes Old and New Testament stories to modern day America, gets a US cast, and sits well within the context of a society where Christianity is still part of the daily fabric of life. Lucy Jane Atkinson’s production makes the right decision to go for simplicity, lets the writing and acting shine, and makes terrific use of a gospel score which is delivered with heartfelt punch by Desiree Rodriguez.

The setting is a church where some kind of support group has gathered to tell their stories and bear witness to each other’s testimonies. It’s dramatically neat, with a crucifix hanging over the gathering, but I did wonder whether if ---given their very particular experiences--- this quartet would choose to meet in such a venue. Neither did I quite buy the final song and the ease with which some overcome their reluctance to participate. 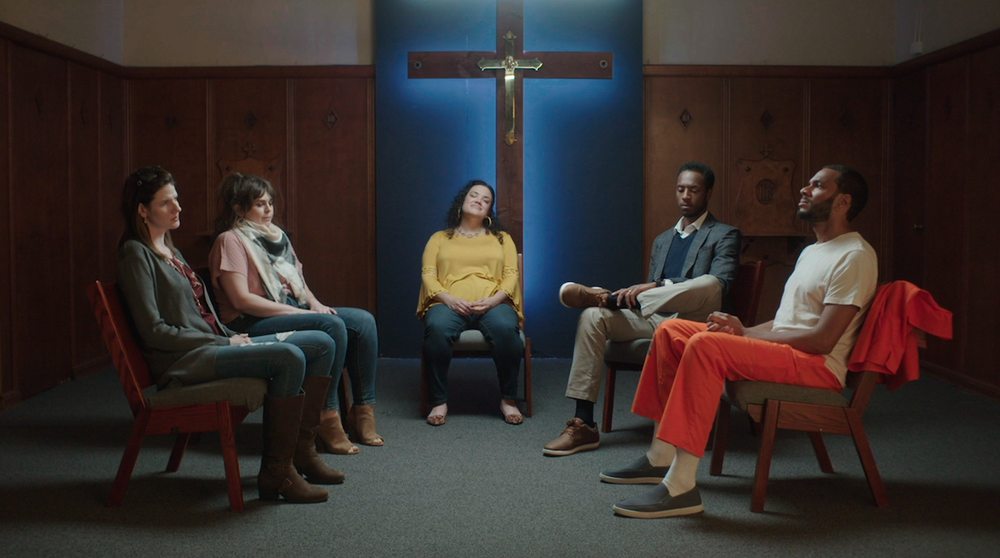 Nonetheless, Bernays’ characters are well worth meeting. There’s Isaac (Doron Jepaul Mitchell) who tells of how he became estranged from his father Abraham, and with very good reason. There are Lot’s daughters (Jessica Giannone and Cori Hundt) who have not only had to deal with losing their mum as the family fled the town that their dad said had become a Sodom, but with far more. The final story brings us into the New Testament, and is told by Anthony (Biko Eisen-Martin) one of the thieves crucified alongside Jesus. Here he becomes an unemployed locksmith trying to walk the straight and narrow who goes back to crime in a desperate attempt to feed his baby daughter and ends up on Death Row.

All of the stories are sharply observed and neatly written, but the latter one has a particular poignance in the way it highlights a justice system that expects felons to ask forgiveness when it often only delivers retribution and vengeance. It seems Old Testament ideas are alive and kicking in modern America.

You can watch Testament online until Sat 24 Apr. Tickets here.*