The NT’s Romeo and Juliet is ruddy gorgeous.

Available to watch for free on Sky Arts (Freeview Channel 11) on Monday 5th and Thursday 8th April, it’s easy on the eye and full of propulsion as it reduces the play to a nifty 90 minutes. Simon Godwin’s production also creates a genuinely interesting fusion of theatre and film. It’s a hybrid that offers some interesting possibilities for the future, not least suggesting that the livestream model is not the only way forward for the NT. It surely mustn’t be at a time when our definitions of what we mean by theatre are daily expanding.

Godwin’s production with Jessie Buckley and Josh O’Connor playing the leads was scheduled to play at the NT last year but cancelled because of Covid-19 before it went into rehearsal. Instead, it has been reimagined as a film – one that's made on a single stage over 17 days. But always a film that playfully acknowledges that this is a piece of theatre. Just as love itself is a kind of performance, one in which the object of our affection becomes the most beautiful person in the world. 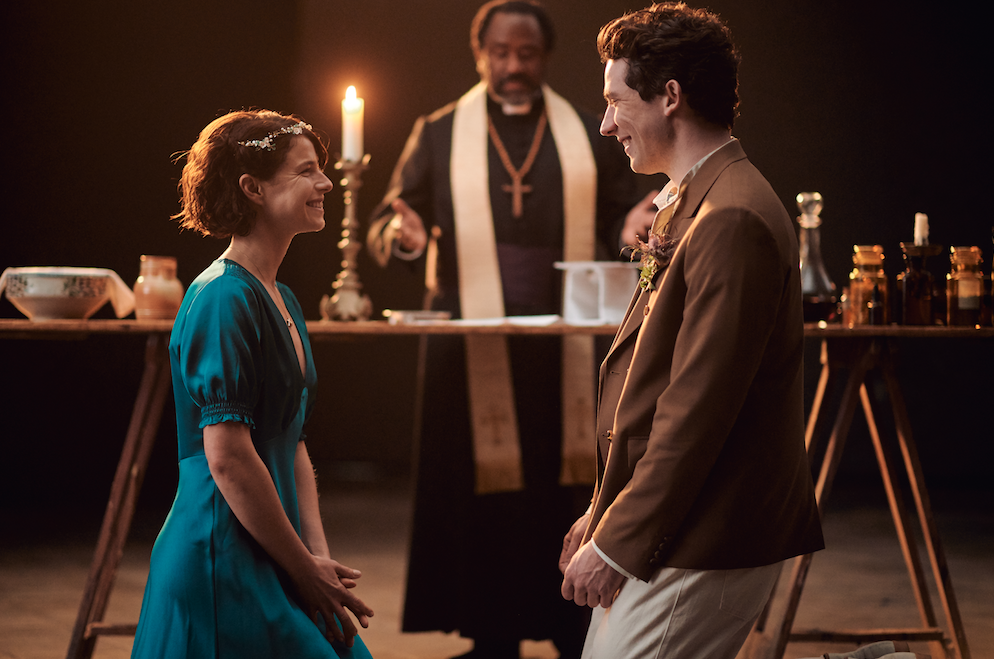 We watch a group of actors gather together to tell a story. We see the artifice, and it requires the viewer to succumb to the same suspension of disbelief that we experience in the theatre. The mistake would have been to try and open this up with locations in the real world; instead, Godwin closes things down to the confines of the Lyttelton Stage. It lends intensity.

A piece of stage machinery becomes a gateway to a party, and a wire trolley of props is a cage through which the lovers gaze at each other. It offers the best of both worlds: never forgetting its theatrical roots but never looking stagey either. It has both a studied intent and a youthful recklessness. There are some insightful flashes too: Benvolio (Shubham Saraf) and Mercutio (Fisayo Akinade) sharing a moment as Romeo and Juliet marry; Juliet’s presentiments of death so that love is mingled with blood. The use of light and dark.

Emily Burns’ adaptation fillets Shakespeare with a kiss and clarity, and every member of the cast delivers. You can’t help falling a little in love with both Buckley and O’Connor. Adrian Lester brings real gravitas and sorrow to the Prince and Tamsin Greig is remarkable as a flinty Lady Capulet, a woman so used to ruling the roost that she has forgotten that she has a heart. Don’t miss it.

You can watch Romeo & Juliet on Sky Arts on Thu 8 April. Details here.